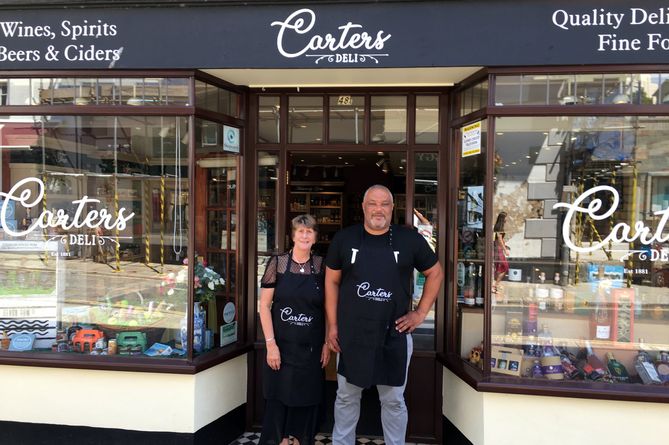 Well, have we got a bit of news for you!

Carter’s Deli in Tavistock played host to Paul Merton and his wife and fellow comedian, Suki Webster, this week – together with a Channel 5 film crew.

Paul, who is famous for appearing on BBC1 panel show Have I Got News for You, and Suki were filming inside the award winning deli for an upcoming series.

“We joked about how controversial and important it is to know whether to put the jam on the scone before or after the cream, depending whether you are in Devon or Cornwall. They also bought chocolates and praised the shop and how appealing it is.”

Dennis said he was not given much notice and only knew an exact time the day before. It’s understood the crew were filming in Cornwall earlier before coming to Tavistock. They were then due to go to Bideford.

Customers gathered outside the well-known shop until filming finished, but the film crew couldn’t reveal what the programme was, so watch out for that cream tea (later in the summer!)

A Quality Delicatessen in the heart of Tavistock, Devon. Free delivery service available in Tavistock and surrounding area, please call for more details.

A Quality Delicatessen in the heart of Tavistock, Devon. Free delivery service available in Tavistock and surrounding area, please call for more details.

Latest Posts
View all News
Manage Cookie Consent
To provide the best experiences, we use technologies like cookies to store and/or access device information. Consenting to these technologies will allow us to process data such as browsing behaviour or unique IDs on this site. Not consenting or withdrawing consent, may adversely affect certain features and functions.
Manage options Manage services Manage vendors Read more about these purposes
View preferences
{title} {title} {title}